If the function is called with a more complex problem, the function divides the problem into two conceptual pieces: a piece that the function knows how to do and a piece that it does not know how to do. To make recursion feasible, the latter piece must resemble the original problem, but be a slightly simpler or slightly smaller version. Because this new problem looks like the original problem, the function launches (calls) a fresh copy of itself to go to work on the smaller problem this is referred to as a recursive call and is also called the recursion step.

The recursion step also includes the keyword return, because its result will be combined with the portion of the problem the function knew how to solve to form a result that will be passed back to the original caller, possibly main.

All of this sounds quite exotic compared to the kind of problem-solving we’ve been using with conventional function calls to this point. Indeed, it takes a great deal of practice writing recursive programs before the process will appear natural.

As an example of these concepts at work, let’s write a recursive program to perform a popular mathematical calculation. Recursively Calculating Factorials The factorial of a non-negative integer n, written n! (and pronounced “n factorial”), is the Product n · (n –1) · (n – 2) · … · with 1! equal to 1, and 0! defined to be 1.

On the contrary, A recursive definition of the factorial function is arrived at by observing the following relationship:

The evaluation of 5! would proceed as shown.Example shows how the succession of recursive calls proceeds until 1! is evaluated to be 1, which terminates the recursion. It shows the values returned from each recursive call to its caller until the final value is calculated and returned. It uses recursion to calculate and print the factorials of the integers 0–10 .

Function factorial has been declared to receive a parameter of type long and return a result of type long. This is shorthand notation for long int. The C standard specifies that a variable of type long int is stored in at least 4 bytes, and thus may hold a value as large as +2147483647. As can be seen in Figure, factorial values become large quickly. We’ve chosen the data type long so the program can calculate factorials greater 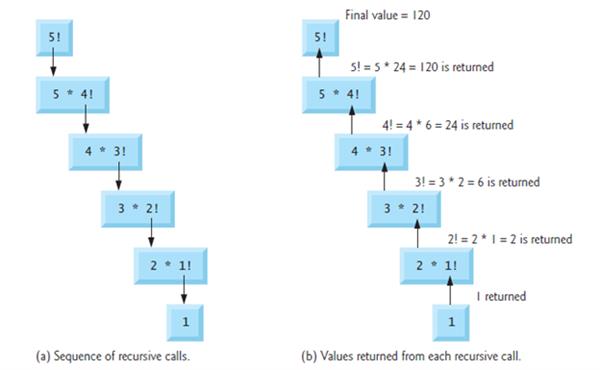 than 7! on computers with small (such as 2-byte) integers. The conversion specifier %ld is used to print long values.

Unfortunately, the factorial function produces large values so quickly that even long int does not help us print many factorial values before the size of a long int variable is exceeded.

Forgetting to return a value from a recursive function when one is needed. Either omitting the base cae, or writing the recursion step incorrectly so that it does not converge on the base case, will cause infinite recursion, eventually exhausting memory. This is analogous to the problem of an infinite loop in an iterative (non-recursive) solution. Infinite recursion can also be caused by providing an unexpected input.