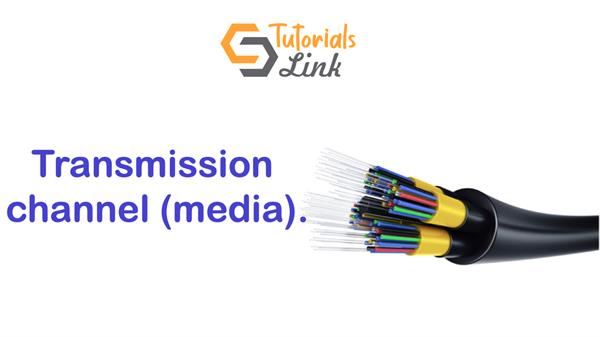 Media use to describe the data path that forms the physical channels between the sender & receiver.

The medium by which information is transmitted is known as transmission channels. The transfer of data is measured in the form of bandwidth the higher the bandwidth the more data will transfer.

In this category, the communication device is attached to each other directly with cables. The data signal is restricted to a cable for transmission so, it is known as guided media.

It is the most commonly used communication media used in LAN for the transfer of data between various computers. They are also used in telephone lines to transfer data signal & voice they are made up of copper wire plastic. The transmission of data takes place at a speed of 9600 bits/second within a distance of 100 meters.

Coaxial cable consists of copper wire as the core surrounded by an insulating material. The insulator is encased by a cylindrical conductor often closed with mesh conductor & the outer mesh conductor is covered with protective plastic there are two types of coaxial cable:-

(Its bandwidth is 80 times more than twisted pair)

The fiber optic cable transmits light signals rather than electrical signals. In this technique, fiber has an inner core of glass or plastic that conducts the data transfer rate in fiber optics are billions bit second. They are highly used in cable operators, telephone & broadband internet companies. They are made up of glan & is then as human hair. They are coated with plastic also known as a jacket.

Media in which the signals are not guided through a solid medium are known as unguided media. Air is the medium through which electromagnetic energy can flow easily. It is also known as unbounded media.

Radio waves have frequencies between 10 kilohertz & 1 gigahertz. It can broadcast in omnidirectional. Various kinds of an antenna can use to broadcast radio signals.

Satellite microwave system transmits a signal between directional parabolic antennas & the satellite in orbit is about 36000km above the equator, because of this microwave system can reach the most remote places on earth & communication with mobile devices. When it sends at 6ghz signal to the satellite so. To reach it of 36000km the signal got very weak & then amplification is done in satellite & then it sends to receive at 4ghz.

These tiny terminals have 1 meter wide antennas & can put out one watt of power. The uplink is generally 19.2 kbps but the downlink is about 512 kbps. In many VSAT systems, the micro station does not have enough power to communicate directly with one another. Instead, a hub with a large high gain antenna is needed to relay between VSAT. In this either sender or receiver has a large antenna & powerful amplification. The time delay or end to end transmit time is between 250 to 300 millisecond.

Infrared & millimeter waves are widely used for short-range communication. The remote control used on television, VCR, VCD, DVD players, etc. Use infrared communication. They are relatively directional cheap & easy to build but do not pan through solid objects. Infrared is used for indoor wireless LAN. The computer in an office in the building can be equipped with relatively unfocused transmitters & receivers.